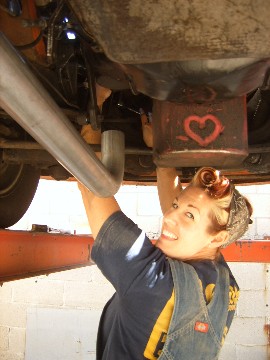 The best way I can explain what an exhaust system is to your car is its like how your car breathes. When I started driving my Studebaker three years ago, I knew the exhaust system would only be temporary. It was transplanted from a different model Studebaker and had been cut and pieced together to pseudo-fit into mine. But I just figured a pipe was a pipe and couldn’t make too much difference.

About six months ago the years of dragging my mufflers over any bump I passed payed off in a huge gaping hole in one of my mufflers! This is when I really began to be serious about redoing my exhaust system. Not only did the muffler have a hole, but the headers also looked like they had holes where the four tubes lead into the connector. Added to this, my header gaskets were blown, which led to more noise in an already noisy car and a general unhappiness of my engine. 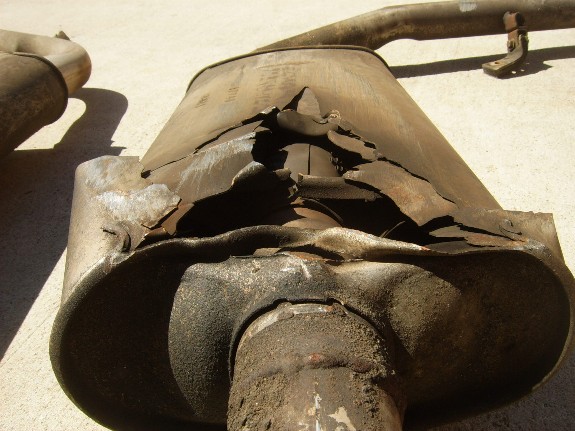 The problem with putting a new exhaust system onto Stude was that I didn’t understand exhausts. How was I supposed to choose new headers, new mufflers, what size of pipe to run, and where to run it out of my car?!? Talking with lots of car friends began to give me a little understanding.Although…I’m seriously still getting my bearings on what all this means, so if any of my information is incorrect, please add your two cents!

Headers. Headers are the pipes that come out of engine block. If you’ve got a V8, you’ll have 8 pipes. Everyone seems to have their favorite style of headers. Some of the reasons are nostalgia. Some of the reasons have to do more with performance. I’ll go into more detail about headers in Headers 101 article.

Mufflers. Mufflers are joined into the exhaust pipe closer to where the pipe ends. They “muffle!” There’s all sorts of different mufflers and they vary in terms of what pitch of sound, how much sound, crackling, etc. Air flow is affected by the muffler also. Some mufflers are designed to slow it down a little, others let it pass right on by. I’ll go into more detail about mufflers in Mufflers 101 article.

Size of Pipe. It seems to me that the larger the pipe, the quicker the flow and deeper the sound. Not only sound is an issue here though, you’ve also got to consider more of the theory of exhaust…and that’s got everything to do with gases leaving your engine, heat, and pressure. You’ll see high performance engines with open headers, meaning there is no pipe/muffler after the header, and that’s thought to be the quickest exit of exhaust thereby increasing horsepower.

Where to run your pipe. This has to do both with performance, as indicated above by open headers. But also has a lot to do with style as well as sound. My previous set up had the pipes coming out the sides of the car just in front of the rear wheels. Another option at the sides is what’s called Lakes pipes. These come out just after the front tire and run parallel to the bottom edge of the car until they stop somewhere before the rear tire. Then there’s straight exhaust that just runs straight out to the back. Some systems join the pipe in the middle so there’s only one exit pipe. Other systems run them straight back. Others connect in the middle with an “H” or “Y” configuration (this has to do with even-ing out the pressure from either side) and then continuing onto two separate exit pipes.

In customizing the Studebaker exhaust, working with a small-block Chevy 383 engine, here’s what we ended up doing. I got to take part in every bit of this process, but really, it was by the help, hard work, and expertise of the guys over at B&C Industries as well as Matt from Department of Customz that made my new exhaust system possible…thank you fellas! 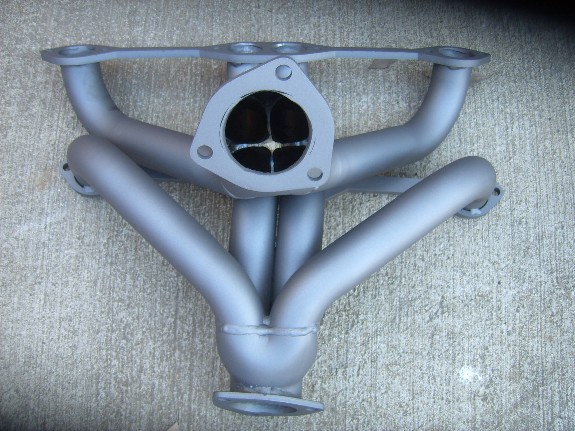 I already had block-hugging headers and we decided to keep the same, although I considered looking for an old pair of rams-horn style ones. The new custom headers that they made for me over at B&C Industries were of a slightly different configuration than I had – the difference being that the two middle pipes set into the connector-tube came to the inner-side and the outer pipes were in front. 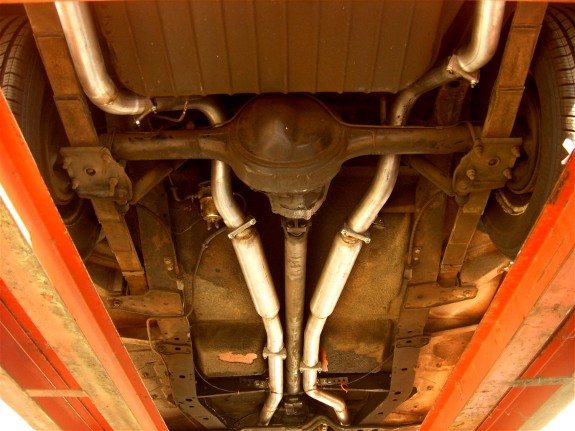 We ran a 2 1/2 inch pipe straight to the back. Tucking it in next to the driveline was a tight squeeze, and running it above the rear axle was even tighter – but it all was worth it because now the profile of the Stude is completely pipe-free on the bottom! All the bends in the pipe were are what’s called a mandrel-bend. This means that when the tube is curved it stays a completely continuous diameter. Flat-bends have ridges in them or change diameter. Thereby affecting the out-pressure of the exhaust system. The high-tech equipment they’ve got over at B&C Industries made mandrel bends possible. 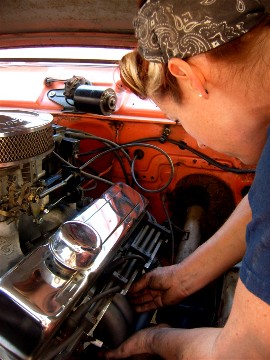 A simple straight glasspack muffler design was used that’s 14 inches in length. Glasspack’s are essentially a baffled tube inside a larger tube with fiberglass in between. This style of muffler gives a nice crackling sort of noise.

Check back soon for the How-To’s for the actual replacement of the system on the car, as well as following the process of making mufflers and making custom headers.

I’ve learnt much through this whole process (and am still learning) but I am definitely impressed with how differently my car sounds, feels, and handles! Not knowing how much an exhaust system affected a car, I’d put this job off for far too long! It almost feels like I’m driving a different car. Check out the end results for yourself in the videos below. I can’t thank the fellas over at B&C Industries enough for all of their help and time! They’ve got a fully-equipped shop if you’re looking to have a line of headers, mufflers, or tubes produced!