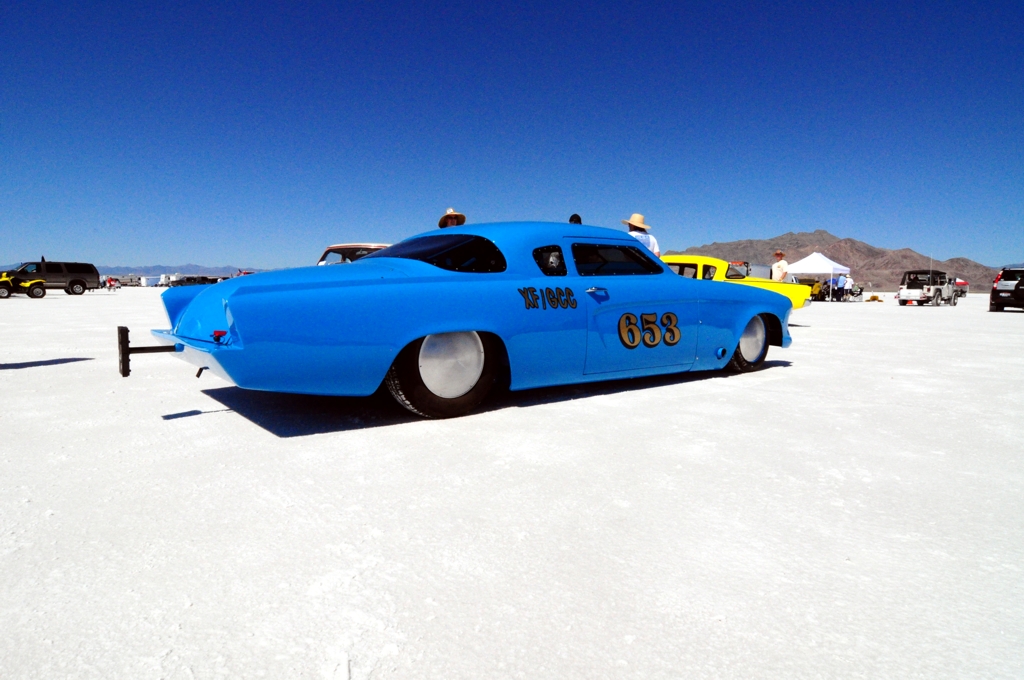 This 1953 Studebaker Coupe looks like she was born on the salt! In fact, this was her first time there – as well as Gord’s! People end up on the salt from every corner of the earth it seems, and with all sorts of fascinating stories about how they got there. For Gord, his timely meeting with Blue Beauty happened while on vacation… in Napa of all places. Sitting on the patio, basking in the California sun, enjoying Napa wine, when suddenly Gord and his Wife’s peace was disturbed by the loud sound of a racing engine. 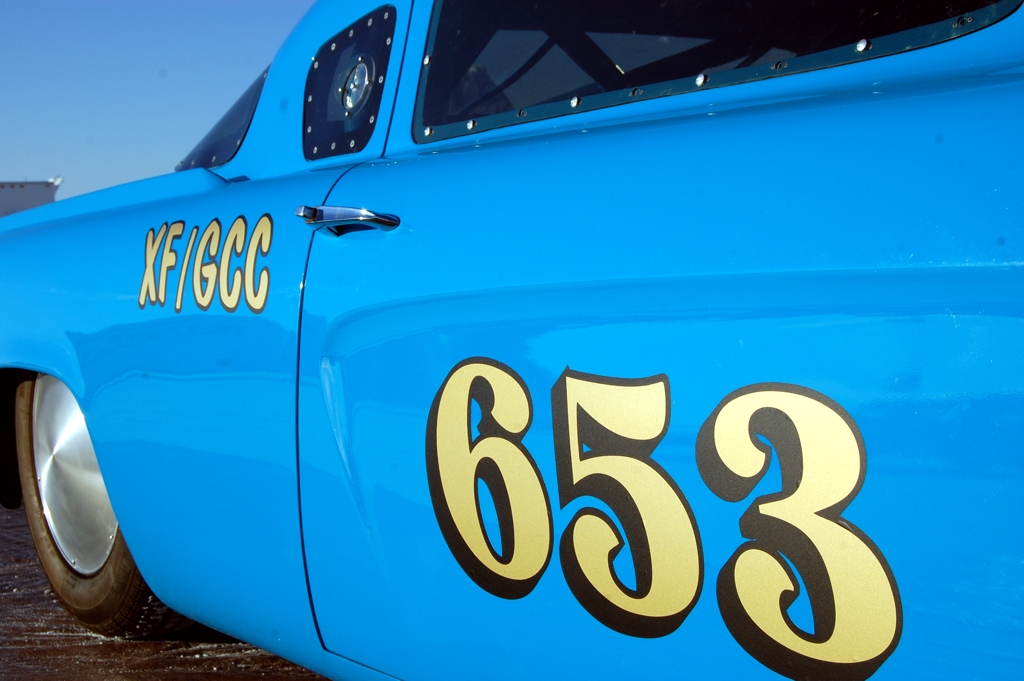 With salt flat racing on his bucket list, Gord went a-searchin’. The search led him to a neighboring garage. Not to the Studebaker, but to the guy who would put him in touch with #653. 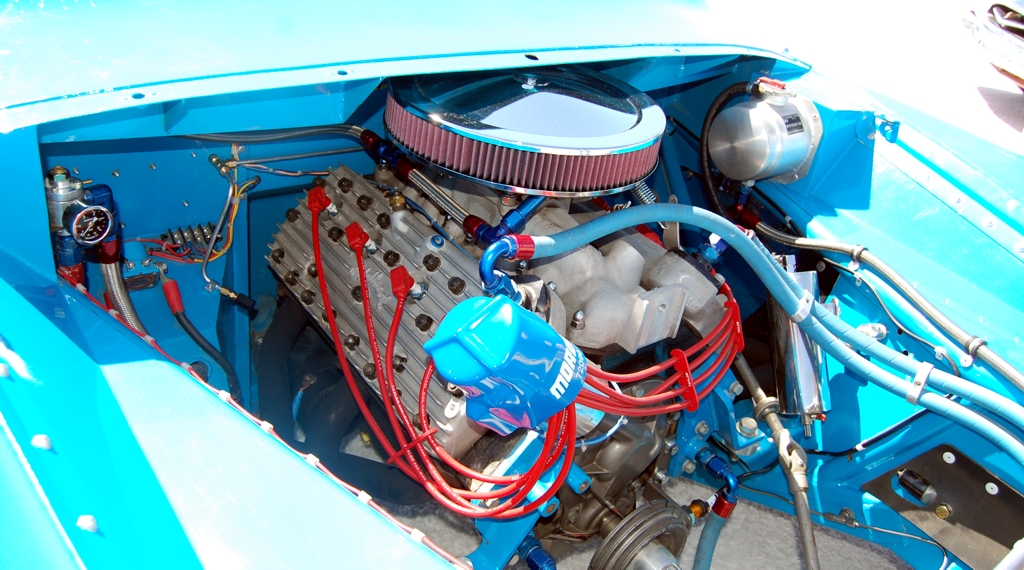 As it turns out, Blue Beauty was built by Ron Zampa who planned on racing it himself.  He’d been planning for a while too… the engine  (built by Chris Zootis Performance Center in Healdsburg, CA) was dropped into the Studebaker in 1994. And what an engine! This beauty is powered by a 296 c.i. Ford Flathead! Unfortunately, Ron passed before he could see through his dream to race. After Ron’s death the Studebaker was purchased by a fellow with plans to turn it into a street rod. (*gasp!) Not to worry, she was too perfect… he couldn’t change her and she just sat there in his garage. 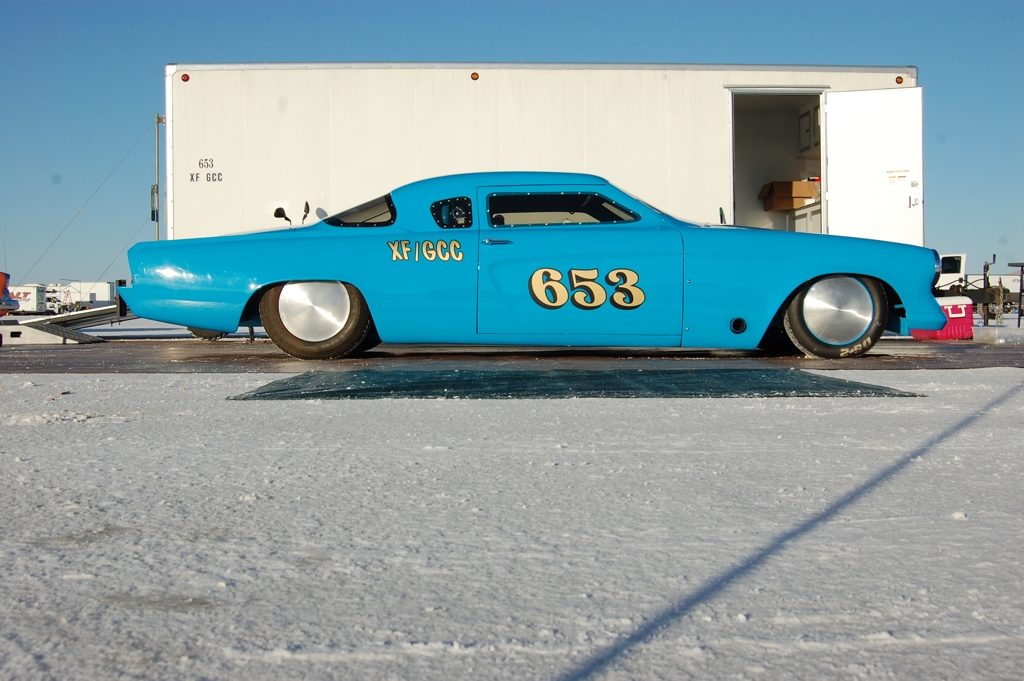 So when Gord followed the noise and told the guy he’d love to have a car for Bonneville racing – he was taken to see the guy who was just waiting for the right person to come along that would want to race Blue Beauty. As fate had it… Gord bought the ’53 Coupe that vacation and brought it all the way home to Alberta, Canada. From there he had some help from his Alberta friends…Ted Allan of Allan Rod and Custom helped get the car ready in just a few short months. He also got a little engine tuning from Dale Adams Automotive Specialists and of course a lot of help and support from his friend and crew chief, Dick Sparrow. 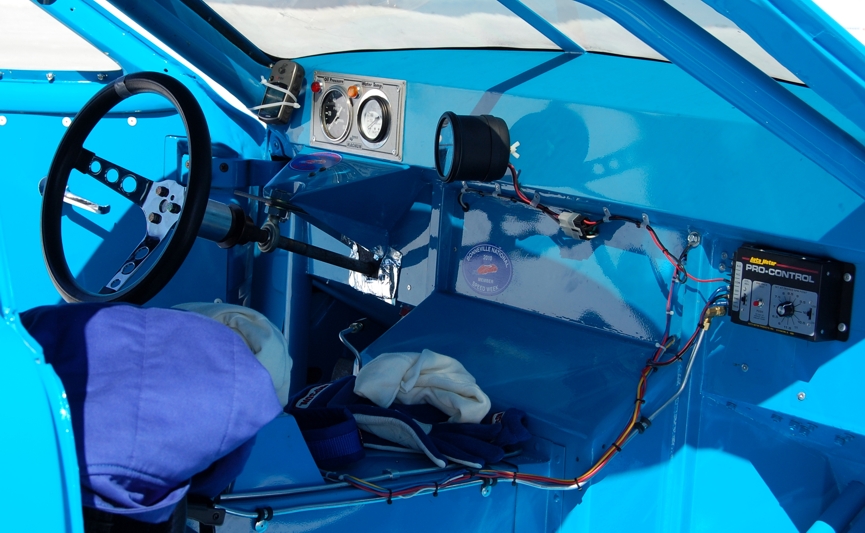 For most part, the only changes Gord had to make to the car before racing were safety modifications. And since Gord was a rookie, he had to go through his licensing passes. As he tells it,

On my first rookie and shakedown run that afternoon I went through the 3 mile at 129.505 to obtain my D License. What a thrill that ride was! I was so nervous and concerned about not spinning. The car (or the driver) seemed to drift over to the left side of the course and I didn’t want to over react on the steering so I just eased off the throttle and gently brought it back after almost taking out the 1 mile marker. My heart was beating faster than the ol flathead!

The second and subsequent runs were a little more controlled and it got easier as the week went on. We had a bit of an overheating issue which we overcame with some adjustments. Ended up making 10 runs that week with the fastest being 149.864 – just 0.136mph from getting my C license, on a 156.701 record that was set by Webster racing in 1998. 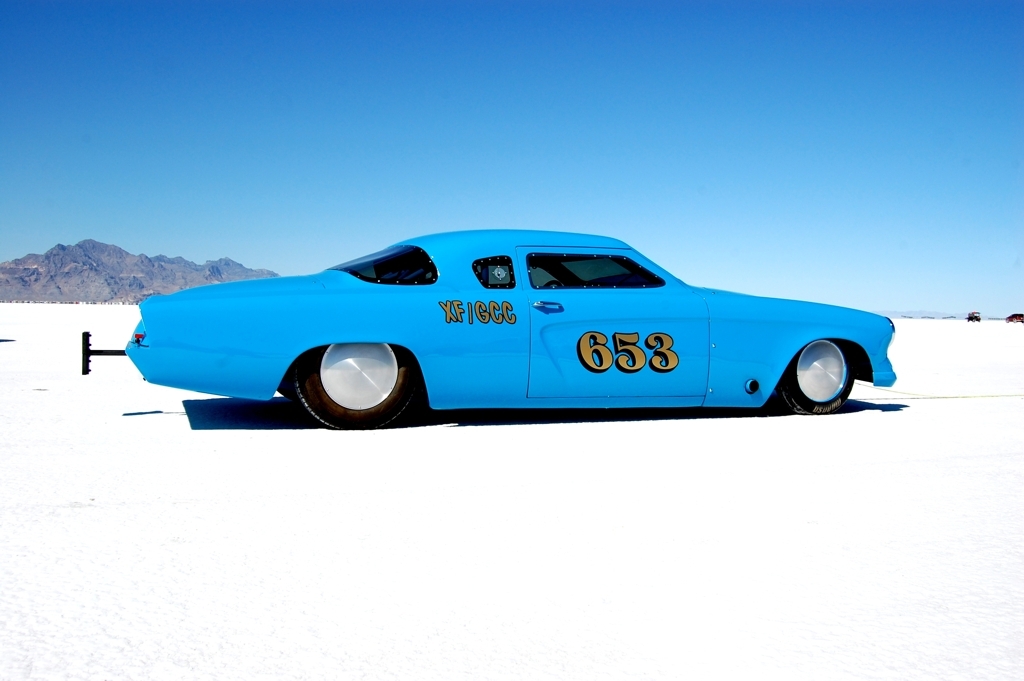 So close! To get ready for next year Gord plans on adding an air dam, roof rails, and perhaps switching out the Holly carb for Hilborn injection. I can’t wait to see Gord and Blue Beauty out on the salt next year… and as I hear it, his wife and three daughters have caught salt fever too! After you break that record Gord… who’s gonna drive next!? I think he can do it… what about you?

Gord would like to thank his: wife, Kim; daughters, Brittney, Kaylee, and Spencer; crew chief Dick Sparrow for all the late nights spent in my garage getting the car ready to race; Bob Nance and the Napa Valley Cuisers for helping me obtain the car and helping us race; Ron Zampa for building the car; Chris Zootis Performance Center Inc. for building such a fine flathead motor; Ted Allan of Allan Rod and Custom and N49 Land Speed Racing Club in Calgary Alberta Canada for helping me get the car ready for speedweek 2010, in just a few short months; and Dale Adams Automotive Specialists in Calgary, Alberta for impeccable tuning of the flathead.