Droppin’ Anchor at Ink and Iron

This past weekend I was able to make it to Ink and Iron 6 – a tattoo festival + car show + rockabilly music event held on the amazing Queen Mary ship in Long Beach, California. Am I glad I dropped anchor! Not only did I hear some great bands and see some awesome cars – but I got to meet up with car customizer Bo Huff and best of show winner Voodoo Larry! 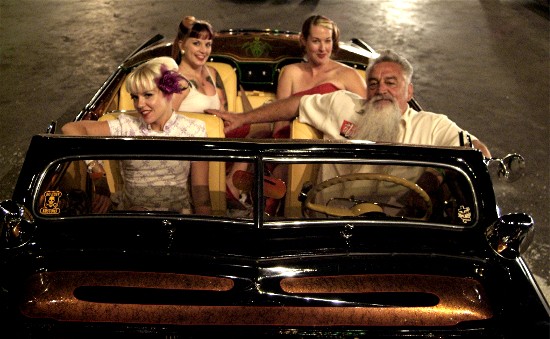 Let me fill you in on the show…this was year #6 for Ink & Iron – and I dug it! Each year it’s held in Long Beach aboard the Queen Mary – which is a huge, Titanic-ish ship. There are tons of tattoo artists exhibiting and doing tattoos. There’s dozens of bands playing throughout the day. Pinups are around too of course – vying for the $2000 grand prize in the contest (why don’t they award cars that much when they win?!?) And obviously… custom cars. This show is all about rockabilly and kustom culture. So of course the cars showing up are along the style the rockabilly crowd likes – Classic rods and crazy customs. The show runs for 3 days…I only wish I was there for more than part of one…there’s always next year, right?! 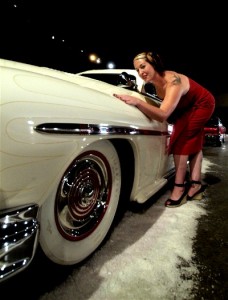 I mostly went to check out what I’d been hearin’ about for years. (My Stude didn’t make it – she’s waiting for new brake shoes and master cylinder.) Never would’ve guessed I’d be meetin’ and hangin’ out with Bo Huff – a well known custom builder and all around cool cat. Not only that but also taking some pics alongside Dixie Deluxe as well as Rockabilly Playboy. (Thanks to Becky Sue at Pin U up beckysue@PinUup.com for these pics!)

For those of you who don’t know Bo, I’ll fill ya in a bit. He’s been doin’ customs since he was a kid in the late 50s and now has a shop of his own in East Carbon, Utah. Bo isn’t just a car guy – he’s livin’ the rockabilly lifestyle. And you can tell it when you check out his cars – they’re classic, powerful, and playful… or as they say “a work of art on wheels.” Other than cars Bo keeps it real around the scene by attending many shows throughout the year and hosting a couple of his own. Coming up in July is The Bo Huff Rockabilly Car Show in Sunnyside, Utah and than in September is Rockabilly Route 66 Car Show in San Bernadino. (More details can be found on his website www.bohuffshop.com or find him on MySpace.) 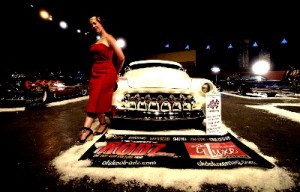 Sometimes it is funner being a girl… I don’t know if Bo would’ve suggested we follow him back to take pictures with his cars if I were a guy!? Lucky day I was wearing a red dress which made for a great contrast next to Dixie Deluxe – a 1949 Mercury. I first saw Dixie at the Grand National Roadster Show and self-proclaimed her as having “Best Paint Job” of the show (see my other picks here.) To me this 49 Merc is just the right combination of beauty and fun. Customized but not too far. Pretty but not too serious. The flames being white shiny on a white suede are both showy and subtle.

We weren’t planning on doing any pictures with Rockabilly Playboy – a 1949 Ford custom convertible…but couldn’t resist when Bo said we should. Becky Sue and I hopped in the back seat and it didn’t take too much coaxing for Bo to hop in the driver’s seat. This car is pretty much over the top with an amazing attention to detail! It was an honor to spend some time around Bo and I hope to be runnin’ into him again someday!

Another cool car I got to see up-close at Ink & Iron was “Voodoo” Larry Grobe’s Voodoo Psychosis. Larry comes all the way from Chicago and the Best of Show title his car won was well earned. We just happened to be walking by while pin up Ivy D’Muerta was posin’ in front of it. (Find out more about Voodoo Larry at www.voodoolarrykustoms.com or his MySpace.) 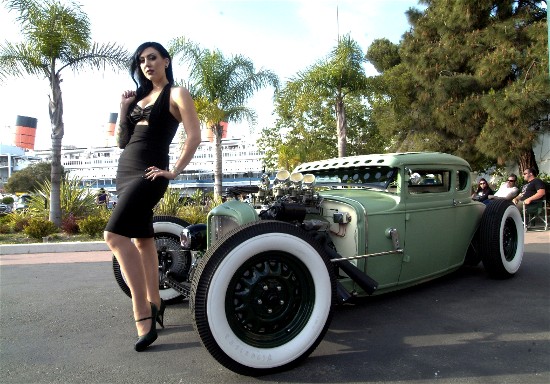 And of course, what would a rockabilly event be without pin-ups?! Ivy D’Muerta hosted this years Pin Up Pageant – where 12 finalists competed. This year’s winner was Miss Diahann with runner up being Miss Rita Von Riot. Two absolutely beautiful ladies – call me old-fashioned, but I thought they both could benefit from a good meal and just a lil’ more clothes on! But to each his (or her) own…and there certainly was enough going on at Ink & Iron to enjoy whatever you’re into… put it on your calendars for next year…

Until then anchors aweigh!
-Grease Girl

All photos courtesy of Becky Sue at BeckySue@PinUup.com