The first thing I picture when I hear the words “chrome car” is my childhood Barbie car that I outfitted with reflective chrome tape. This 1932 Ford Roadster is no Barbie car, that’s for sure. 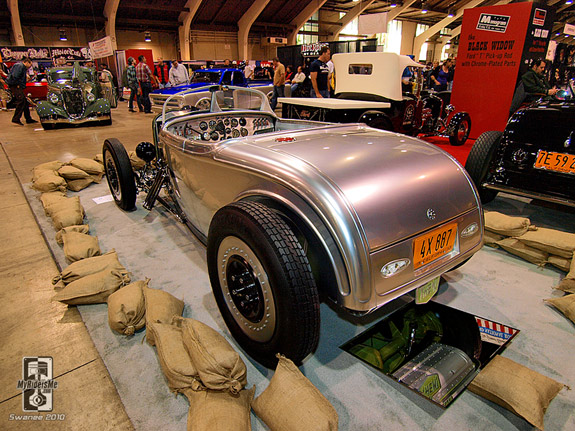 Let’s begin by taking a look at the Platinum Bomb. This 1932 Ford Roadster was designed and built by owner Zach Norman along with the Troy Ladd and his crew at Hollywood Hot Rods with a WWII airplane in mind. (Get more about this car in A Roadster That Can Fly?) So when it came to paint, he wanted a polished aluminum looking body. Those of you who have worked on 30s-era cars know that finding a rust-free body to do this with naturally would be impossible. What else is there to do but give it a chrome-like paint job?

Simple right? Hardly! When painter Tom Prewitt chuckled and told me, “We just followed directions,” I knew there was more to the story. How did the Platinum Bomb get to be so shiny? (Speaking of shine…the picture of Tom below shows the car’s body before clear coat is put on. As you can see in other pictures, the finished look is chrome-like but not as mirrored.) And why, if there’s a chrome paint, aren’t more people using it!? Who doesn’t want a chrome car?!? 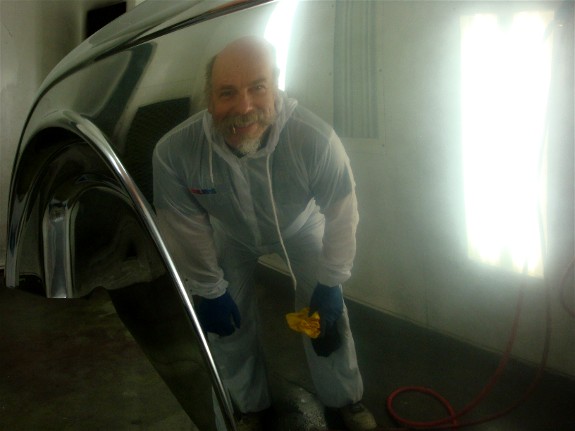 Platinum Bomb’s paint job is anything but simple. Good thing it was given to the trusty hands of Tom Prewitt and Matthew Means at Department of Customz. Those fella’s managed to do what nobody had done before. What’s that you ask? That is successfully applying Kosmic Krome in 9 days.

Nine days sounds like a regular painting time to do you, right? Well, sure if you’re using regular paint. Kosmic Krome is anything but regular! House of Kolor developed this color around 2004. However there’s some pretty big hurdles to get over in using it, which is why you’ve probably not seen an all-chrome car at your local cruise in.

So, yes, it was basically a feat of genius that enabled Tom and Matt to get this car looking so good in so little time. Why the time crunch? Platinum Bomb needed to be ready for its unveiling at the Grand National Roadster Show. Before paint is put on, there’s a ton of work that goes into preparing a car’s body. Any imperfections in the metal are going to be highlighted by paint – even more so by reflective paint. So Platinum Bomb’s body had to be completely perfect before painting. That took three weeks of metalwork and bodywork before the paint process could begin. 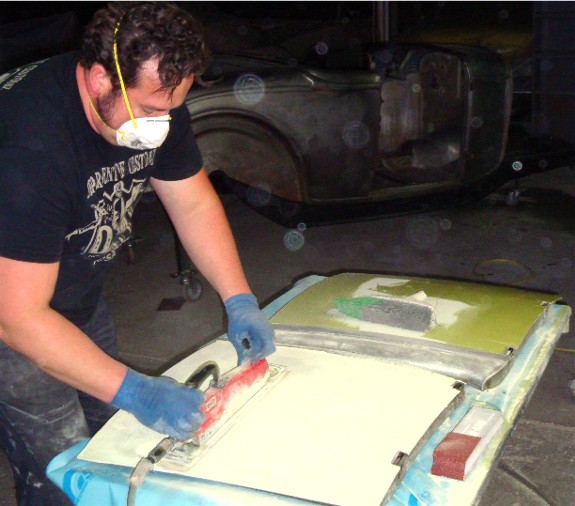 So how did they get the painting done in a mere nine days? Well, what Department of Customz did was basically redevelop the process for applying Kosmic Krome. While all along the way using the same products House of Kolor suggests and yes, as Tom said, “following the directions” given on those products. It’s the application that they put the magic into. The good news for us is…now that Department of Customz has figured out the process, it makes it more feasible for you or I to get a chrome paint-job of our own!

Let’s go through some of the details of the painting process. First you prep the body to perfection. After all the body prep you apply a sealer. Than you’ve gotta do a complete black paint job. That means black paint, clear coat, color sand, and buff it. Than you’ve gotta do a second complete paint job applying Kosmic Krome followed again by clear coat, color sand, and buffing. (And beware! Matt says this paint will actually form a pattern electrically while you buff it, crazy, huh?!) 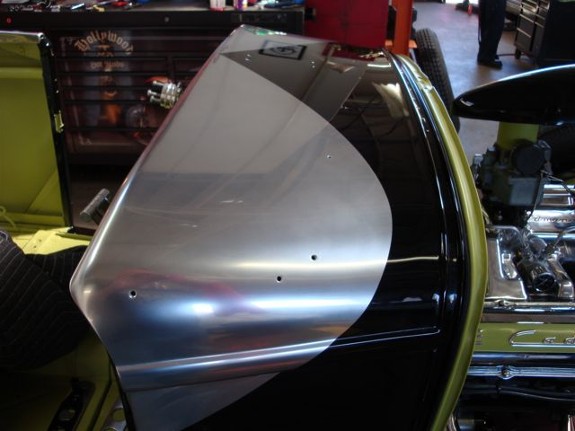 Other than Kosmic Krome being on all nice and shiny there’s the reproduction of the lime-colored Zinc Chromate to be done as well. Zinc Chromate was a primer used on the interior of WWII-era aircraft. What you probably can’t tell by the pictures is that it has an authentic texture-looking surface to it. The original paint was textured, but of course what they were using was no actual Zinc Chromate. So to achieve the correct effect they added something into texturize the clear coat over the green.

I know you’re still wondering what the secret magic of the application process is. Well it wouldn’t be magic if we knew how it worked would it?! Not that anyone would ever be able to pull this off as a home job anyway. So I think its best to leave this magic in the hands of the pros. And as of now, Department of Customz are the only pros who have it.

I’d say the Platinum Bomb was pretty lucky to get such a shiny coating and be all dressed and ready for the Grand National Roadster Show. I’m sure this beauty is a dream to drive. If you’re dreaming up a chromed car of your own – keep dreaming or drop a line to Department of Customz…they’re fully equipped to make your dream a reality. Or there’s always the option of doing what I did at age seven – just cover your car in shiny tape!