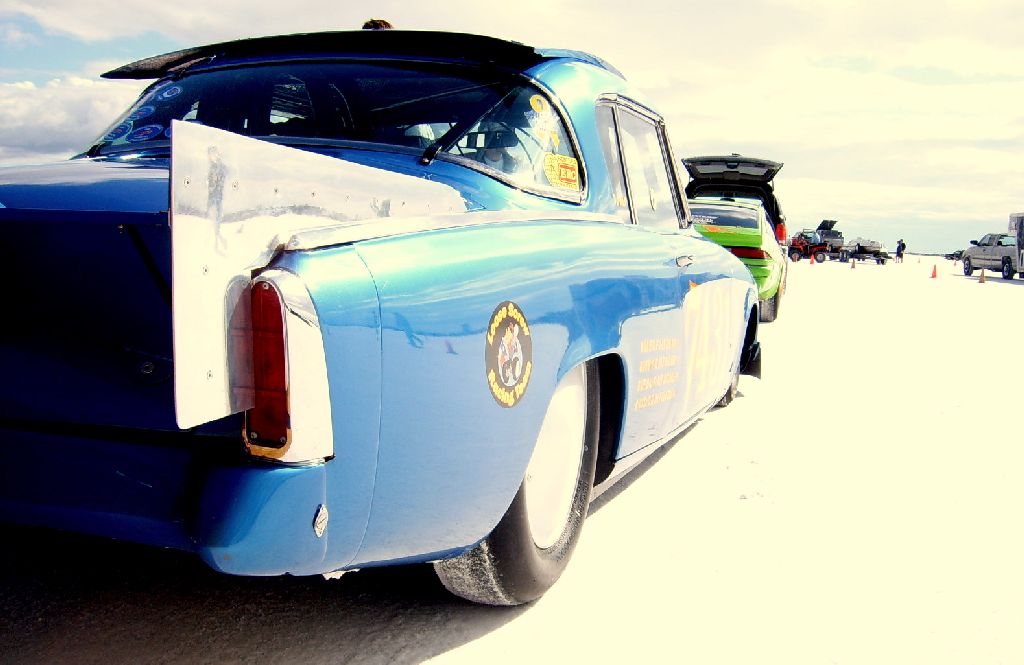 The countdown is on for Speed Week, the land-speed racing event of the year! This Speed Week makes sixty-two years that Southern California Timing Association (SCTA) and Bonneville Nationals Incorporated (BNI) have run this week-long speed spectacular. Since the whole point of the event is the “world’s fastest automotive speed trials” that means SCTA/BNI are responsible for verifying the record breaking speeds. Upon my first Speed Week experience last August, I pondered exactly HOW one breaks the speed record as I watched speedsters, lakesters, roadsters, coupes, pickups, and motorcycles speed from the starting line.

I headed down to the tech inspection area to find out. Every vehicle goes through tech inspection upon arrival to verify both legality and safety. If they’re lucky they’ll go through a second time to verify a broken speed record! 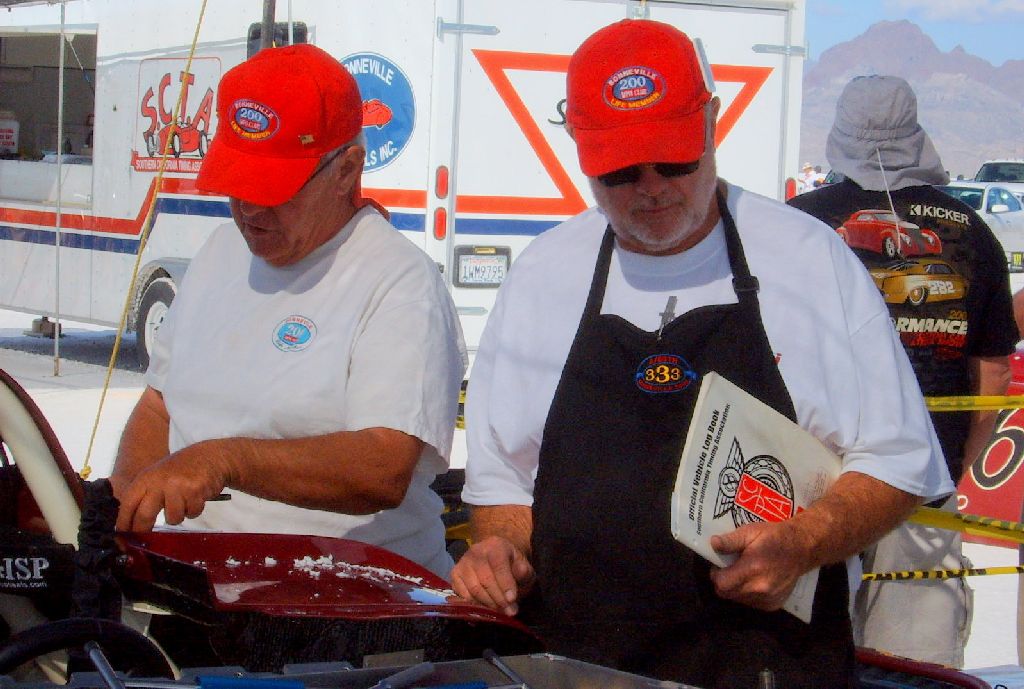 So how do you break a record at Bonneville?

First, you’ve got to build a kick ass car and follow SCTA/BNI’s rules while doing it. All sorts of different classes of cars race at Bonneville. They differ by body style, body modifications, engine size, and fuel used. Pick a class, add a good chunk of cash, plus a crew of noble friends and a good portion of blood, sweat, and tears and you’re ready to go!

Once at Bonneville and passed through tech inspection  (and of course with a proper license – they don’t just let any loony out on the track!) you can head out for a run. Bonneville, in case you didn’t know, is a salt flat. That means the extremely flat land is covered in naturally-formed salt crystals.

Three different tracks run at Bonneville. A long course, short course, and special course. The long course runs for seven miles straight! Within those seven miles you’ve got two miles to build speed followed by three timed miles and ending with two slow-down miles. The short and special course are only five miles in length. The same two miles for building speed and two miles for slow-down, but the difference is you’ve only got one timed mile in between. In order to run on the long course you’ve gotta reach a speed of 175 mph during the first 1/4 mile timed. 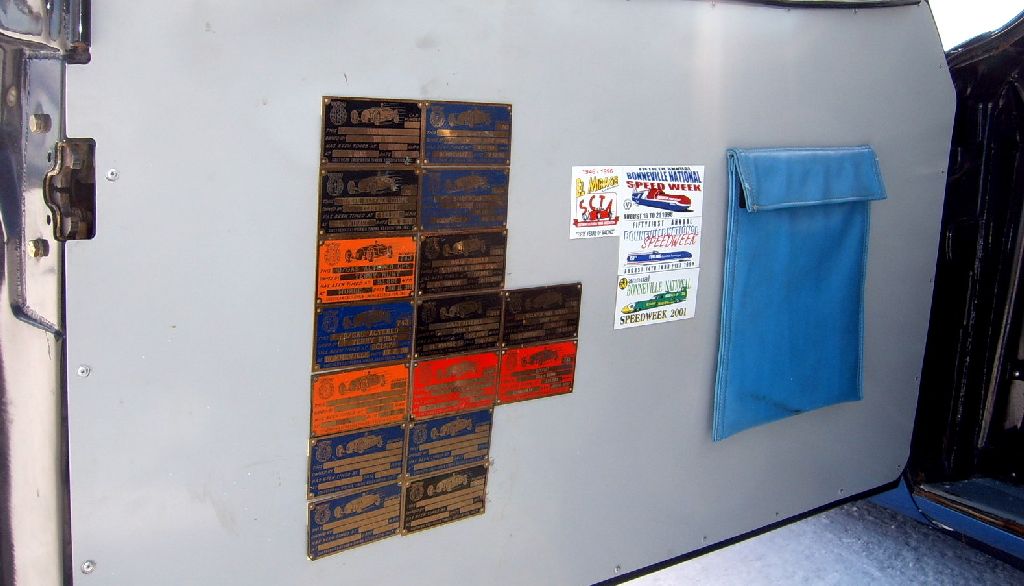 At the track, you’ll get in line and wait for your turn. As a spectator, this is one of the really cool things at Bonneville. First of all, varying classes aren’t separated – so you might watch a motorcycle take off one minute and the next it’s a streamliner. Secondly, as all these cars are lined up and waiting, you can go straight up to them – check them out and talk to their crew/driver/owner.

When it comes your time to run… you push your baby and go as fast as possible! Each mile of the five-mile stretch your official time will be calculated. If one of those official times beats a previously-set record in your racing class, then congratulations, you’re on your way to breaking a record! 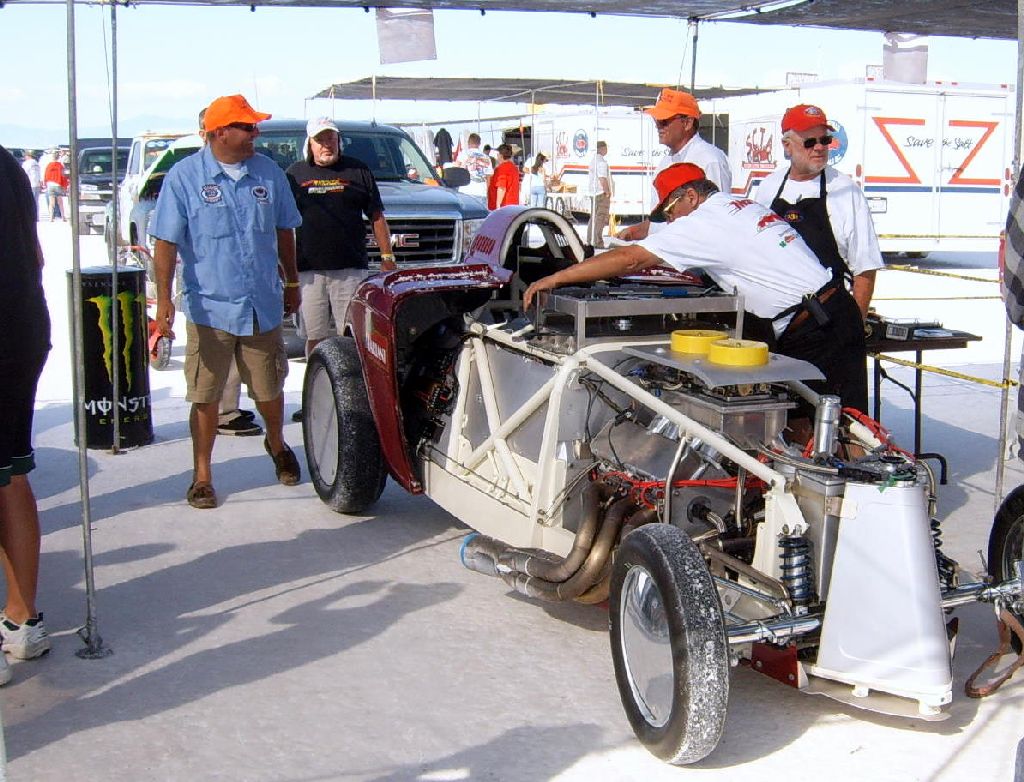 After a record-breaking run, the first place you’ll go is impound. Impound is a holding area where you and your crew will be able to spend four hours working on any modifications you choose to make. This is a crucial decision because after those four hours are up, your car is gonna have to sit in impound, untouched, until the following morning at 7am when it’ll be time for run #2.

Run #2 will prove your speed-record time of your run #1. The average will be taken of both runs and only a record-breaking average of the two runs sets a new record. If you’re running the long course, they’ll be matching up each counted mile.  For example, if the previous record was 202.888 mph and your run #1 was 204.262 mph during mile 3 than your run #2 would have to be at least 201.516 during mile 3. Although run #2 didn’t beat the record, the average of the two runs is 202.889, good enough. Obviously, if you had a better run #2, the record would be even higher.

After you’ve made both of your record-breaking runs, the record isn’t official until tech inspection certifies that the engine and fuel used are legal for your running-class… One way they can verify if it’s a legal engine is by pumping it. This is done by removing a spark plug, turning over the engine, and using a special machine that will let them know what displacement the cylinder is. Or if that’s not possible they’ll take off the cylinder head and physically measure displacement.

Once those things check out, congratulations, you’ve set a new speed record!